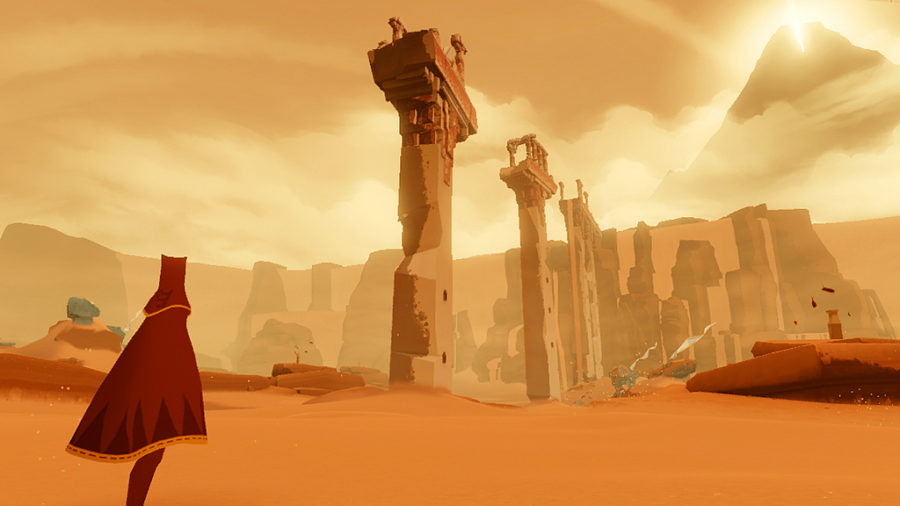 This is a screenshot from the game "Journey" which proves the emotional journey that videogames can take you through just based off of their visuals.

Say the word ‘art’ and some immediate images form: sculpture, narrative, painting, and illustration, to name a few.But, video games are not on that list.

Now, not all videogames evoke the highest amount of emotion, but every video game that provokes some sort of feeling should be considered art.

Video games are a medium of mediums. Composers create soundtracks and effects, artists create characters and landscapes, writers draft story arcs and dialogue and programmers choreograph all the moving pieces into a seamless world, according to an article from Forbes.

There are plenty of games that never intend to be art. In fact, most games are made with the sole purpose of creating income. It’s not that making money conflicts with art, but if the basic purpose in creation is financial, it is a widget for your bottom line, not a work of art.

Videogames should be considered art because they can help us find connections with deeper questions that we may have inside of ourselves. You’re presented with a series of obstacles, and so it’s how you quickly make those choices that discern the best outcome for anybody playing.

There are video games that intend to suck the player in, and spit it back out with new experiences. Videogames should be considered the ultimate collaboration of arts. There are some video games that evoke emotion that rival that of Mozart or Picasso.