Could “Black Mirror” Reflect our Future? 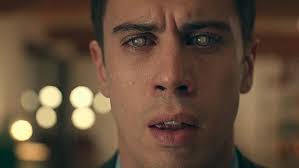 This photo is from an episode of "Black Mirror" entitled 'The Entire History of You' where the main characters can recall any memory that they have lived through.

A typical installment of the hit TV show “Black Mirror” involves a futuristic take on aspects of current technological/political problems. How plausible are these installments? Could they actually happen? Or are they just figments of the creator’s imagination.

“This is a very different alien society than the one we live in and one that has taken our phones and turned them into the built environment,” program director Dylan Hendricks said in an interview with Business Insider.

In China, a new brand of ‘social currency’ is gaining traction, one that bears a striking resemblance to the premise of the opening episode of season three, “Nosedive”.

“Zhima Credit, the social currency in question, is part of a larger app that Chinese users make more than $5 trillion in mobile payments through each year,” according to an article from INews.co.uk.

“People say that ‘Black Mirror’ is predicting the future, but it really is just what the real life is already like. All of these predictions are just coming true one after the other. There are some episodes that are just so far fetched that there is no way that they are plausible,” freshmen Lucas Sweeney said

In season four’s “Crocodile”, a self driving pizza van hits a pedestrian, and it sets off a series of events. Now, Pizza Hut has announced their first “fully autonomous delivery concept vehicle.”

“It is funny how quickly Pizza Hut is to make this automated delivery system right after the release of the ‘Black Mirror’ episode where there was a self driving pizza van that hits a pedestrian. This could make people think that this thing is unsafe,” sophomore Blake Lyerla said.

The episode, ‘The Entire History of You’ is set in a world where people can record every aspect of their life and instantly play it back, which gives trouble to the leads of the episode. While people do not have built in eye camera’s, there are applications that record up to 10 seconds of video like Snap Inc Spectacles. Also, Samsung’s contact lenses that take a photo every time they blink.

“It’s crazy that these things exist. I have heard about them, and they are crazy. It’s like we are living in the future. It is almost like ‘Black Mirror’ sensed what was happening and decided to make the best TV show in ages,” freshmen Bella Daws said.

Part of what makes “Black Mirror” so unsettling is that its episodes take place in worlds that could easily pass for our own, save for some leaps in technology.