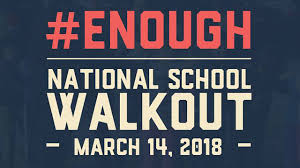 Within the last week, thousands of teenagers have spoken out on the topic of gun control due to the mass shooting that occured on February 14 in Parkland Florida. Since the shooting, student survivors have organized a march on March 24 and a school walkout out March 14 and April 20 to raise awareness.

“I think it is pretty awesome. I think it is cool that students are taking action and speaking up on controversial issues. I would for sure take part in the walkout because I am part of the young generation and if I want to see change then I need to take action and be a part of this walkout. I believe it could open the eyes of adults and make them realize the younger generation is willing to fight for change,” senior Kelly Rivera said.

One of the school walkouts was planned by the Women’s March organization and is planned to happen on March 14. The other is on the anniversary of the Columbine shooting, April 20.

“I think if enough people are involved [the walkout] will be effective because if enough people demand a change, things will get done. I would like to participate [in the events], I think it is a good cause and as a high school student, it is important to feel safe at school,” junior Allison Baltz said.

The Parkland, Florida shooting resulted in 17 dead students and faculty members. Several others were injured or in critical condition.

These events have made an impact on Timberland students as well, and many have spoken out on their opinions and concerns.

“I think it is devastating that so many more teenagers and teachers have to go through something like that, We have lost too many lives to school shootings. I think [the walkout] will help make Timberland safer, and other high schools as well,” Baltz said.

To find out more information on these national events, visit www.marchforourlives.com.