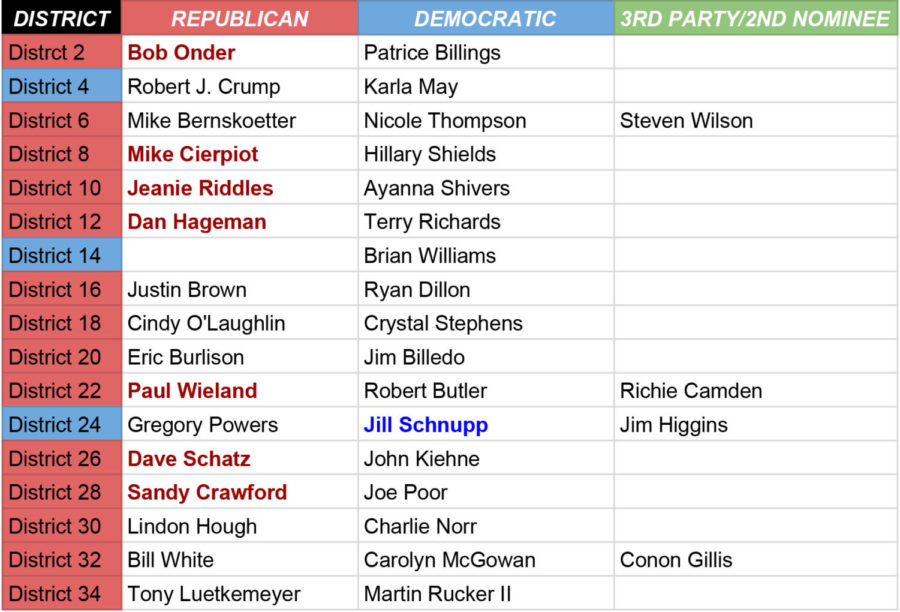 During the election last night, all 163 seats of the Missouri House of Representatives were up for re-election, along with 17 of the 34 seats in the Missouri Senate. The General Assembly, which for its last session was controlled by a large majority of republicans, had little change in which party controls each seats, and no party had a net gain or loss in either chamber.

“I did not like that, but with the [federal] congress being a majority of democrats, I feel a lot better,” junior Gus Barnett said.

Onder, who represents district two which covers the Wentzville area, was able to see off the challenge of democratic nominee Patrice Billings. Onder got 59 percent of the 87,364 votes cast, whilst Billings got 41 percent of the vote. Onder originally represented the district 13 from 2007 to 2009. He would then run in district two in 2015, and has held the seat since.

“To be honest with you I am not saying that I am a democrat but I support some of the democratic ideas, but I honestly do not have an opinion about it, and I’m just going to see how that plays out,” sophomore Tayonna Henderson

In the house of representatives, the republicans picked up two vacant seats giving them 116 of the seats in the house. Democrats maintained control of their 47 seats, though not every district. The minority leader did not stand In district 97, democratic representative Mike Revis lost to his republican challenger Mary Coleman.

This loss was offset by the narrow democratic pickup of district 70, where democratic candidate Doug Clemens defeated the incumbent representative Mark Mattheisen. Clemens won by .5 percent of the vote, meaning less than 100 of the 15,913 votes cast separated the two candidates.

“I do like that the state legislature is overwhelmingly controlled by republicans because they support bills and laws that are the best for my family,” sophomore Courtney Ledbetter said.

For full results, click here or check out the attached charts.