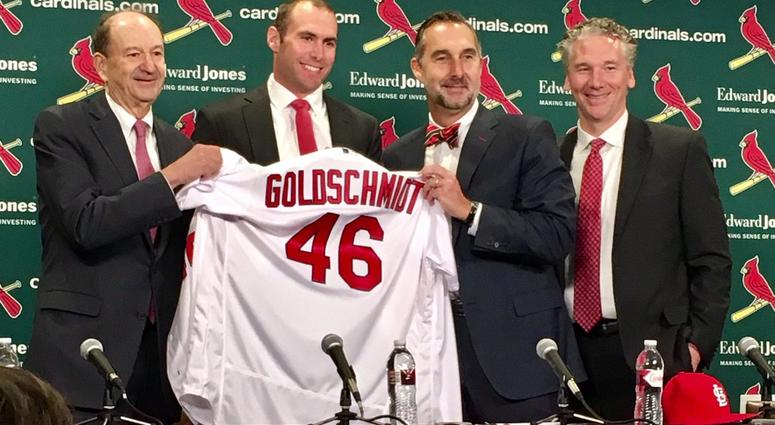 The Cardinals have struck a trade to acquire six time all star and three time NL MVP runner up Paul Goldschmidt from the Arizona Diamondbacks.

Goldschmidt, 31, will be a free agent after this season, but has said he is willing to negotiate with the Cardinals after 2019. Goldschmidt is coming off a sort of down year for him, his batting average at .290, and hitting 33 home runs.

The acquisition of Goldschmidt means Matt Carpenter will move over to third to play there everyday, meaning Jedd Gyorko has been moved to the bench. Goldschmidt has played full seasons every year since 2011, when he was called up midseason, so a consistent impact bat that will stay on the field everyday was most definitely acquired in this deal.

“This is a big, big time acquisition by Mozeliak,” junior Blake Haffer said.

However, to get some, you have to lose some, and that some is Carson Kelly, Luke Weaver and Andy Young. Kelly was supposed to be Yadier Molina’s replacement and the catcher of the future, but Kelly could not hit major league pitching. Long praised for his defense, after multiple years the offense never came around. With the emergence of Andrew Knizner, Kelly was unneeded, and was shipped off. Weaver, who has flashed greatness at times, was off last year. A pitcher with only two true pitches, the starting role is not exactly perfect for him. Additionally, Weaver had been buried on the depth chart by other emerging starters, and would of started off in AAA anyways. As for young, he was a utility infielder in the minors, and the Cardinals 12th overall prospect.

“The price to get a player of Goldschmidt’s caliber was very low. Amazing trade,” junior Ethan Seymore said.

Now, the Cardinals change their offseason focus. Now with their superstar big bat they have desired for three years now, they will focus on the bullpen, bench, and minor league depth. They are looking at all relievers, both lefties and righties. As for the bench, the Cardinals are in search for a left handed hitter to provide power off the bench to try to liven up late game at bats. With this, a new backup catcher to replace Carson Kelly, who was supposed to be in that role this season. Some depth could be added as well, to provide some help in dire situations, such as injuries, or struggles with other players at the major league level.

With Goldschmidt coming to St. Louis, the Cardinals get a whole lot scarier. While they are satisfied, they have said that they are not pursuing Bryce Harper currently, but would not mind getting him for the right price at the right time.