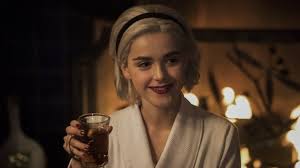 An image from the new episode

Netflix’s twist on “Sabrina the Teenage Witch” took another dark turn with their newest episode. As the Spellman family gets ready for their “Winter Solstice,” they encounter some Christmas demons.

The family lights a Yule log to keep the house safe from paranormal entities. But of course, something gets in, with the help of Mrs. Wordwell. The Spellman family works together to defeat the evil.

Along with the Spellman problem, Susie Putnam starts a new job as Santa’s helper elf. But a dark turn takes place and Susie ends up missing.

This episode was not anything different; the same idea and concept was  happening throughout all of the first season. It was a let down that the producers did not use Krampus, the anti-Santa. Krampus is known for being the evil entity that happens on Christmas. The show not using it makes sense due to the popularity of Krampus, but at the same time he should been in the episode because he is so popular.

At the end of season one, Sabrina “changes”, that change did not appear in this episode. But the cast did not reference this episode being before the “change” happened.

Overall this episode was poorly done and the makers of “The Chilling Adventures of Sabrina the Teenage Witch” should have held off releasing the episode. This was a very rushed job and inputting into season two would have made more sense then season one.

For more on this show, check out Audrey Whalen’s review of “The Chilling Adventures of Sabrina the Teenage Witch.”