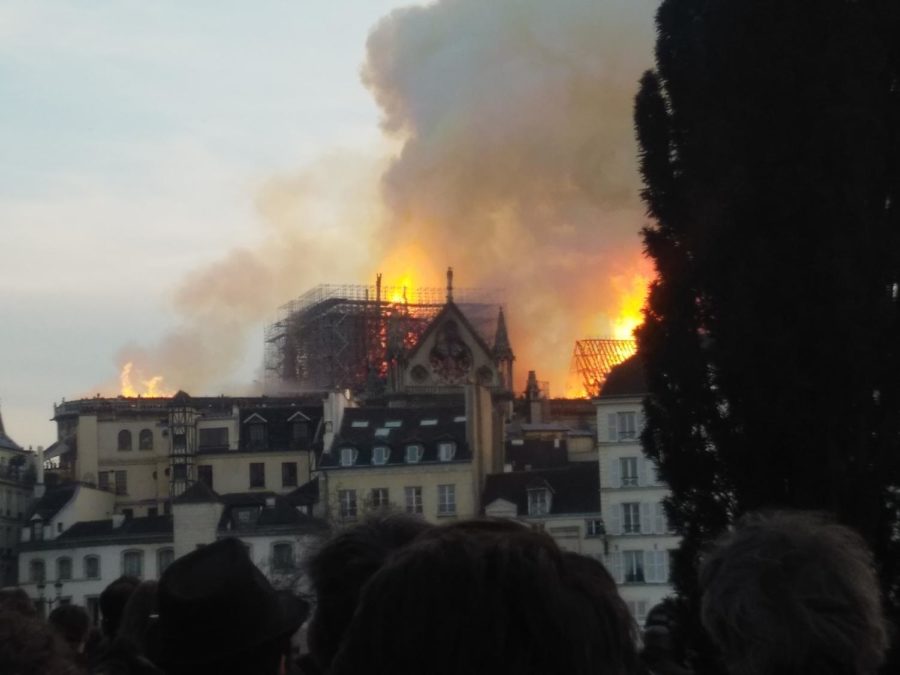 Notre Dame Cathedral on Ile de la Cité in Paris has suffered significant damage after a fire broke out in the building around six o’clock local time Monday. According to French officials, a majority of the roof, the famed spire and much of the wooden frame have been destroyed in the blaze, although just to what extent the building was damaged is not yet determined. Two policemen and one firefighter were also injured, according to CNN.

“It’s horribly sad. There’s a lot lost. A lot of history lost, but luckily they were able to save a lot of it, but it’s such a tragedy,” history teacher Matthew Smith said.

Notre Dame was saved from complete destruction after an nine hour battle against the flames. Ile de la Cité was evacuated by authorities for fear of structural collapse due to the fire and continued to remain closed into Tuesday morning in Paris as officials fear the fire, which reached one of the large bell towers, could have caused structural damage that may still result in collapse. Architects Tuesday morning have stated that the structure does have some vulnerabilities, though overall is stable. It is suspected the fire began on scaffolding atop the roof which was part of an over $6.8 million renovation, according to CBS News, though this is not officially determined.

“I felt last night exactly how I felt watching the towers fall. I had the same disgusting feeling in the pit of my stomach. I wanted to throw up, and cry all at the same time, and I just kept holding my head watching the news. It’s just so unbelievable,” French teacher Laura Kaiman sid.

Notre Dame is also home to many historical artifacts, holy relics and paintings. After the blaze began, archbishop Michel Aupetit as well as cathedral staff grabbed what relics they could before evacuating, and later police and firemen evacuated other relics from the burning structure, though just how many were saved remains unclear.   According to the New York Post, Paris Fire Brigade chaplain Jean-Marc Fournier entered the burning cathedral to save the Crown of Thorns and the holy sacrament. A full list of artwork within the cathedral at the time of the fire is available on Notre Dame’s website.

“It’s heart wrenching. It’s a symbol of the city. After the Eiffel Tower, it’s the most recognisable monument in all of Paris,” Kaiman said.

Some items have been confirmed as rescued. One such item is purportedly a rush from the Crown of Thorns purportedly worn by Jesus on the cross. The Tunic of St. Louis was also recovered. The famed rose windows in the facade of Notre Dame have survived, though the extent of possible damage to them is unclear. Other stain glass windows did not survive, and the status of large numbers of other artifacts remain unconfirmed. Sixteen copper statues of the twelve apostles of Jesus and four evangelists that for more than a century had sat atop Notre Dame’s roof were removed just days before the fire as part of the renovation, and survived.

“The structure of the cathedral is saved and the main works of art have been put somewhere safe, thanks to the combined action of the different services of the State working together,” the Paris police tweeted according to CNN.

French president Emmanuel Macron has promised to rebuild the cathedral in the wake of the fire. Some sections of Notre Dame did not suffer significant damage despite the collapsed roof, with the vaulted ceilings helping to prevent damage to the interior, although the famed spire atop the building did collapse down onto the altar. French billionaire Francois-Henri Pinault has promised €100 million towards the reconstruction, according to the Economic Times. A collected half a billion euros have been pledged to reconstruction.