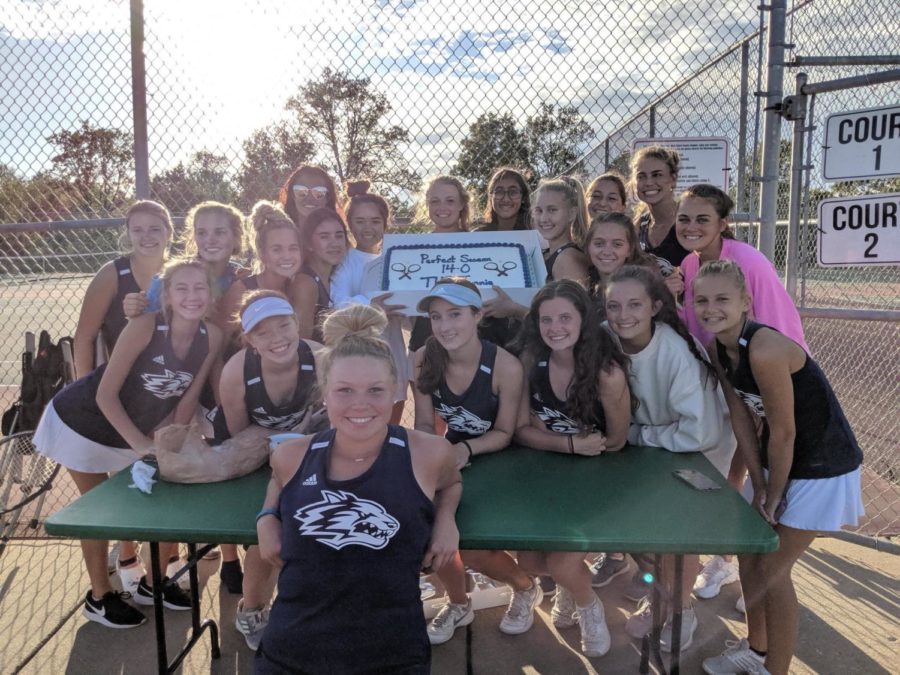 The girls tennis team has had a season like no other. This was the first year in Timberland’s history the girls tennis team earned the title of conference champions, and it is the second year as team district champions, coach Jennifer Granicke, said. The team practices just about every day after school unless they have a match. While time eventually becomes very limited due to three to four matches a week, the girls work to continue to succeed through practice.

“Tennis is a very mental sport so we have to be as positive as possible,” senior Emma Whitehead said. Just getting in one’s own head during a match can cause a big loss. In Whitehead’s case, the only match she lost this season was one where she said she made a few bad hits and got too down about it to continue to keep playing the way she wanted to.

“Saint Dominic was a hard match because they’re around our skill level and gave us good competition,” junior Katie Manker said. Although the girls struggled at times to be in the right headspace, they said they had an extremely successful season according to coach Granicke.

This year, the team has not only made improvements at competition, but they have also improved at working together as a team. “Our ability to work together made our team so successful this year,” Manker said. The team also gained some valuable players. For example, most of the varsity players from last year returned this year and worked hard in the off-season to improve their skills, said coach Granicke.

“We have some truly amazing people on the team this year, and we mesh together really well…we cheer each other on and stay modest for every match,” Whitehead said.

The Timberland girls tennis team has been named one of the top eight teams in the state of Missouri. Three of the girls on the team, senior Camille Carlton and juniors Livia and Laila Votruba, even had the opportunity to compete in the state tournament. The season is over now, but the 2019 team will be remembered at Timberland.